Crazy Ex-Girlfriend officially ends on Friday, April 5th, and let me tell you, I am devastated. The finale of the fourth season will premiere this Friday at 8/7c, and I don’t feel fully prepared for the show to end, but alas, all good things…yeah.

TVLine reached out to the cast and crew from Crazy Ex, asking them what their favorite songs are. (Such a hard question, right?)

Rachel Bloom (Rebecca) and Scott Michael Foster (Nathaniel) couldn’t pick just one—it’s not possible—but they were able to come up with a pretty varied selection.

Here is a list of their top 8 favorite songs:

Rachel Bloom said this made the top of the list because it is simultaneously feminist and anti-feminist, which can be tricky to accomplish.

2. “Settle for Me” – Donna Lynne Champlin

Although Santino Fontana has long departed from the Crazy Ex cast, we can’t help but fawn over the days when he was a regular on the show—and sharing his beautiful voice with the show’s viewers.

Foster really likes all of the Daryll song repertoire, more specifically, “Gettin’  Bi.” Though Foster has now branched out to liking “Antidepressants,” he’s still a Daryll fan at heart.

Lovell was the only member to show up for the live taping, and because of this, this song has had a special place in her heart.

Ruiz claims that she really belongs in the disco era, which is why she has such a strong attachment to this song. It is pretty catchy, though.

Hull says that this song has consistently been his favorite and even with the emergence of new songs, it has never been bumped.

Dolgen, one of Crazy Ex’s screenwriters and producers, says that “[You] Stupid Bitch” is the ultimate Rachel Bloom song. Both emotional and relatable, the song completely captures the evolution of Rebecca’s character.

Burns, the choreographer of the show, says that this is her favorite, because of the dance portion. The spin on La La Land does offer great choreography, and the dancing in the street definitely takes it up a notch.

Crazy Ex-Girlfriend will air its series finale on April 5th at 8/7c with a special concert airing after. 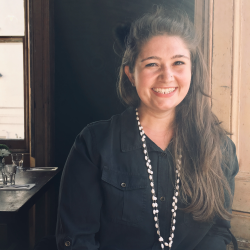